When His Wingman’s Plane Ran Out Of Fuel, This Pilot Offered A ‘Tow’ Through Enemy Airspace

Heroism in war is a common thing, but some feats of heroism are unlike others and stand out from the rest, simply for their unique, even unbelievable elements. This is one of those stories. I encountered this story on War History Online.

The actions that are about to be recounted took place in the dangerous skies over Hanoi, Vietnam. If they were not a matter of fact, they would seem beyond the realm of reality. The two parts of this heroic act executed by Maj. John R. Pardo on March 10, 1967 include the following: 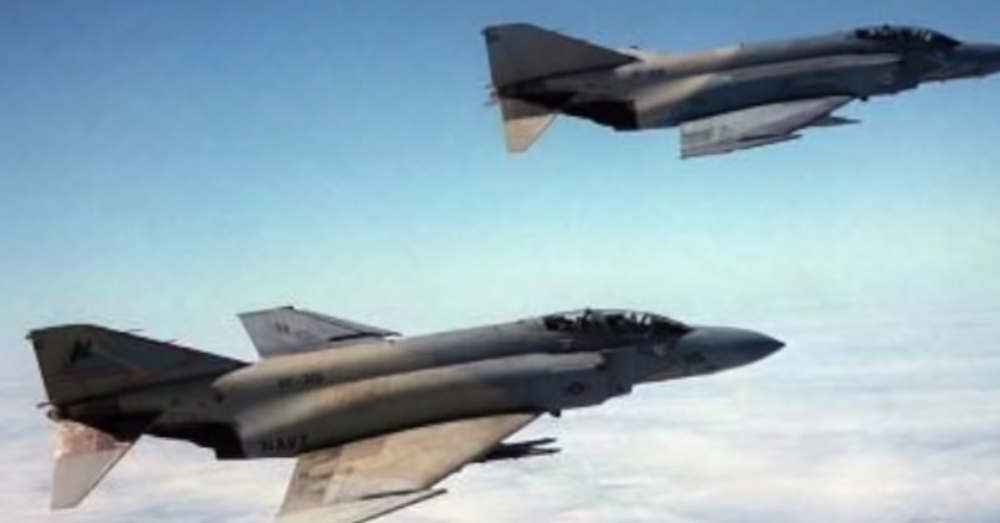 
Pardo’s wingman was Capt. Earl Aman. They were flying F-4 Phantom fighter bombers out of an Air Force base in Thailand. Their mission was to hit steel mills near Hanoi. F-4 Phantoms are two-man fighters, with a pilot and a navigator. The planned flight would cover 1,000 miles round trip, so fuel was critical.

As they flew over North Vietnamese territory, they ran into heavy enemy anti-aircraft fire. Aman’s plane was hit hard, took serious damage, and began to lose fuel rapidly. As they drew near Hanoi, they were hit again by heavy flack. Pardo’s plane was also damaged and began to leak fuel. He was able to complete his bombing and strafing mission and then the two planes started back for Thailand. 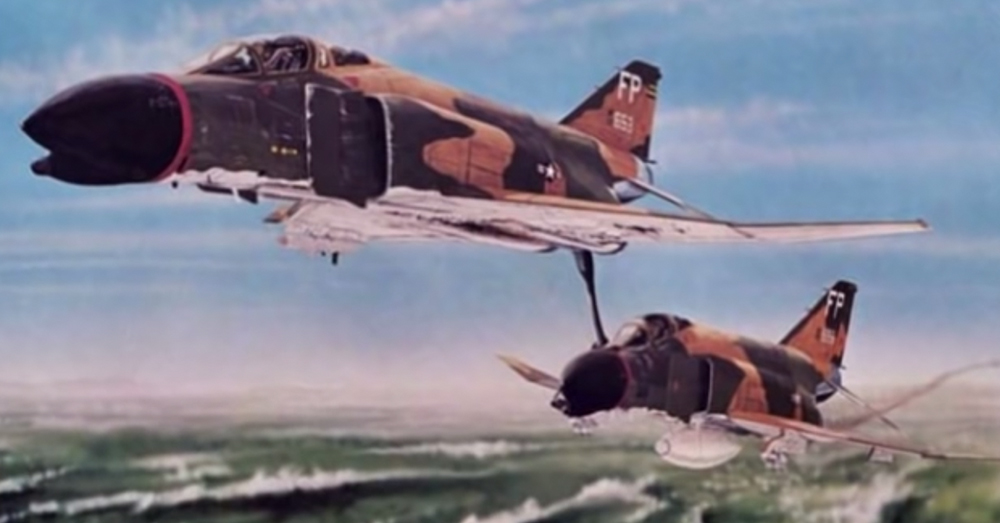 Source: YouTube/AVweb
Pardo “towed” his wingman out of Vietnam and into Laos.

The problem was quickly evident that they would not have the fuel to return all the way to their home base in Thailand. The immediate need was getting out of North Vietnamese air space and over Laos, where they could eject from their planes and be potentially rescued by friendly forces.

Pardo had a decision to make. 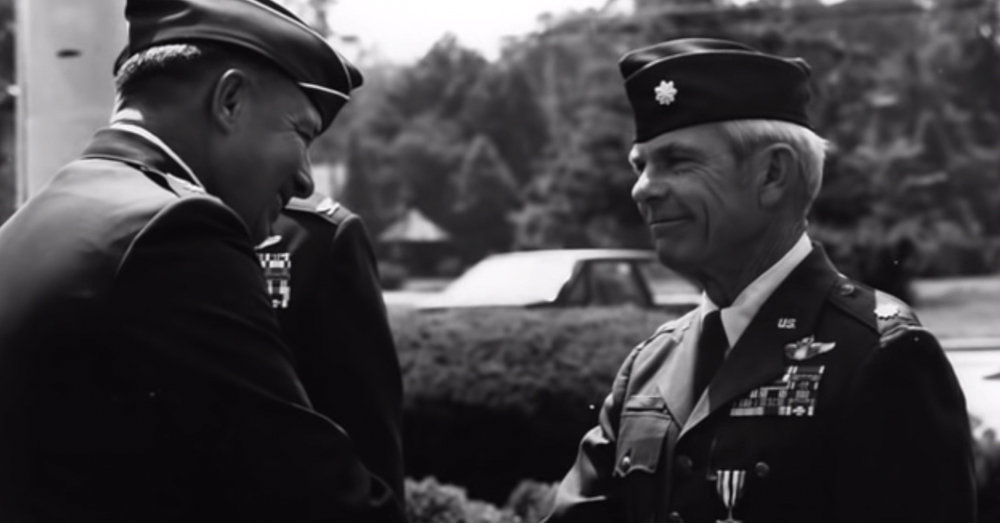 Source: YouTube/AVweb
Maj. Pardo was awarded the Silver Star for gallantry in battle.

Aman’s F-4 engines flamed out with no fuel. Pardo had to think of something to help his wingman and quickly. He came up with the unbelievable idea of trying to “push” Aman’s F-4 into Laotian airspace. He maneuvered his plane behind Aman’s, but quickly found out that his fuselage was not made for such a maneuver.

He had to come up with another idea, fast.

F-4s were designed for landings on aircraft carriers. Pardo told Aman to “drop his tailhook.” Aman did just that and Pardo maneuvered his Phantom, putting the tail hook of Aman’s aircraft on his own windscreen. It worked! But every 15-30 seconds the tailhook would slip off the windscreen because of the instability of both planes in contact like that, and wind turbulence. Pardo would maneuver each time to continue the effort. 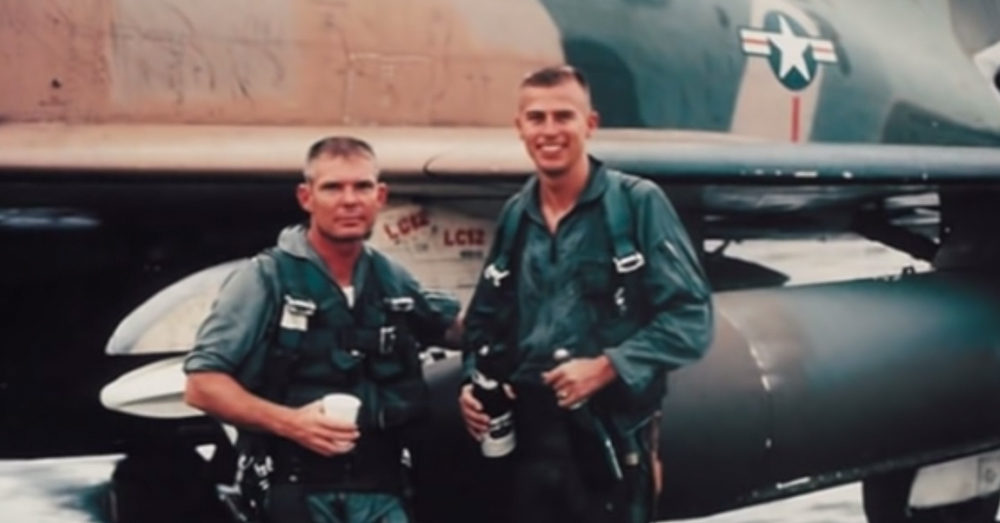 They were finally over Laotian territory. Aman and Houghton, his navigator, ejected first, then Pardo and his navigator. Once on the ground they had to evade enemy troops. Pardo was the first to be rescued by American rescue helicopters. All of them would be rescued soon after.

For his actions that day, Pardo was awarded the Silver Star.

Pardo’s Silver Star citation reads, in part: “Major John R. Pardo distinguished himself by gallantry in connection with military operations against an opposing armed force over North Vietnam on 10 March 1967. On that date, Major Pardo was flying as the pilot of the lead element on the return from a 1,000 mile flight in which heavy flak damage was encountered. He noticed that his wingman’s aircraft was extremely low on fuel. Realizing that the wingman’s aircraft would not make it out of North Vietnam, Major Pardo implemented maneuvers to literally push the aircraft across the border. The attempt was successful and consequently allowed the crew to avoid becoming prisoners of war. By his gallantry and devotion to duty, Major Pardo has reflected great credit upon himself and the United States Air Force.”

But the story doesn’t end there. The bonds of combat veteran warriors last a lifetime. Many years after the war was over, Pardo found out that Aman had Lou Gehrig’s Disease (ALS) and had lost his ability to speak. Pardo raised funds to purchase a voice synthesizer, a motorized wheelchair, and a computer for his old wingman. He would raise more funds later to get Aman a van that he was able to use until his death.

The Veterans Site honors the courage and the quick-witted ingenuity that Major John R. Pardo showed on that day in March of 1967. In his actions, he showed all of us what it means to “have each other’s six” in the most difficult of circumstances. We are all humbled by your example of such selfless generosity.