The United States Senate on Wednesday failed to reverse the recent doubling of interest rates to 6.8 percent on millions of new federally subsidized student loans.

While the measure to return the rate to its lower level of 3.4 percent on Stafford Loans actually garnered a vote of 51-49, the arcane procedures of the “world’s greatest deliberative body” requires at least 60 votes for passage. In the U.S. Senate, majority rule is clearly an outdated notion.

The current national student loan debt stands at $1 trillion. The failed vote means that millions of new college students will amass more debt in the coming years because of Washington policymakers’ indecision.

Rates on new Stafford Loans, made to undergraduate students from moderate- to low-income families, doubled on July 1. It is estimated that 7 million students are affected — or about 25 percent of all new federal student loans made this year.

The interest rate hike means an average student borrower will pay about $1,000 more over the life of the loan and up to $4,000 more in interest if they take out the maximum loan amounts over their four-year college career.

Not a great amount to the many millionaires in the Senate, but plenty to a graduating college senior with few job prospects available in a market where unemployment is now at 7.6 percent. 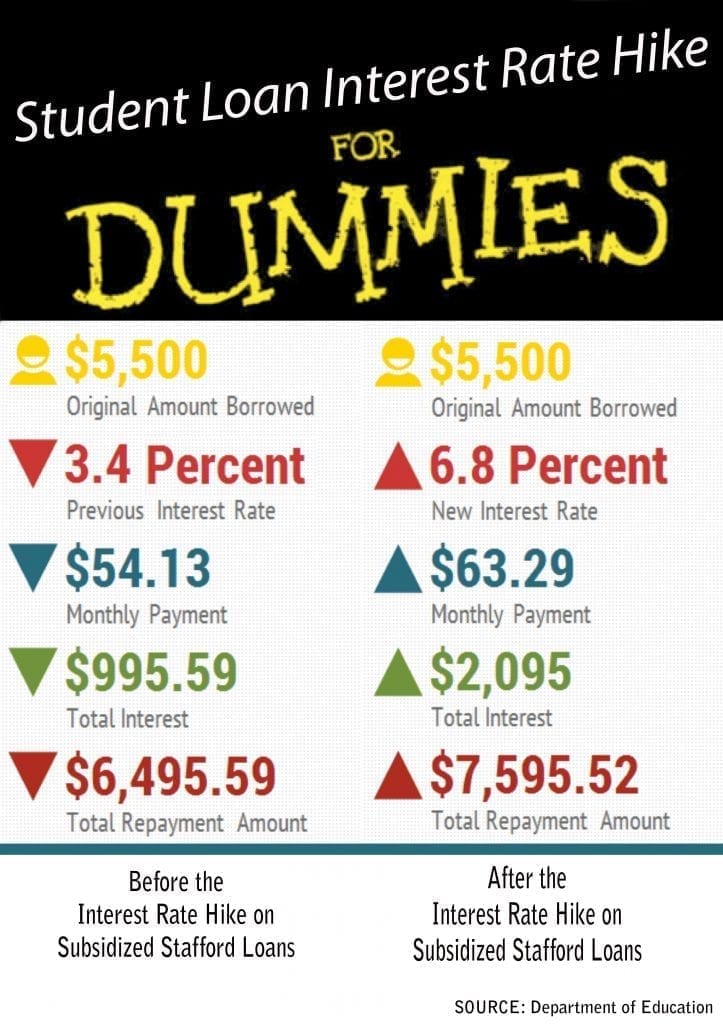 The 6.8 percent interest hike on student loans makes a considerable difference in the interest borrowers will pay back on the life of their student loans. That interest cuts into their savings and other resources.

Interest rates on federal student consolidation loans, which allow borrowers to bundle all their student loans into one package, and which are based on the average of all the combined interest rates, could also rise for borrowers who are hit with the Stafford Loan increase.

It’s estimated the Class of 2013 will graduate with more than $35,000 in student loan debt. That means they’ll have fewer funds for savings, investing in the housing and auto industry, and retirement, which is certain to impede the nation’s economic growth in the coming years.

Critics say the Senate doesn’t want to just solve the immediate problem; it wants to find a permanent solution to the entire matter of the country’s skyrocketing student loan debt.

Senators debated a bill that would revamp the student loan interest rate methodology altogether, linking rates to the ten-year Treasury bill, plus a few points.

There are two potential problems with that approach: The first is that as the interest rates on the Treasury bills rise, so would the interest rates on student loans. Those variable rates would have no cap, according to the proposed legislation introduced by Senators Joe Manchin, D–W.Va. and Richard Burr, R-N.C.

While they might be low for the first few years, (3.66 percent for all undergraduate loans for the upcoming academic year), the interest rates could explode, likely surpassing even the current 6.8 percent rate. So much for helping existing middle school and high school students.

The second, and perhaps bigger problem, is that no matter what legislation the Senate ultimately passes (if it manages to overcome its partisanship and 60-vote rule), it will likely never become law because the House of Representatives has its own ideas about how to revamp the student loan equation and therein lies the rub.

There is very little comity between the two sides of the Capitol — whatever gets passed in the Republican House these days seems to die in the Democratic Senate and vice versa.

In a sense, it is admirable that some Senators want to fix the larger flaws in the current system rather than applying a temporary Band-Aid, and in their minds, simply reversing the doubling of the interest rates for one year is just that.

But in a strange disconnect, they don’t seem to accept the fact that because Congress is so paralyzed and mired in gridlock, they will never get their perfect fix in place. They can have as many colloquies and debates as they want, but it’s all just a good show that won’t result in any substantive change.

Despite bills proposed by other lawmakers, the doubling of the student loan rates is destined to remain in place, harming the very people that our legislators claim to be so interested in helping — those 7 million students this coming school year.

Once again, Congress has talked the talk, but couldn’t find the wisdom and balance to walk the walk. College students and their families will be paying the price for its ineptitude.

Fed Banker Fisher Calls for Cutting Megabanks Down to Size