As the San Francisco 49ers and the Kansas City Chiefs face off over 100 yards of turf at Hard Rock Stadium in Miami, an equal distance of thriving coral will be replanted not far off the coast.

A team of former special operations veterans from FORCE BLUE and the UDT/SEAL Association will be tackling this offshore task, bringing with them a pedigree of experience few others can match. FORCE BLUE is the only nonprofit organization in the world that retains and redeploys former Special Operations veterans, meanwhile providing them with “mission therapy” focused on marine habitat conservation.

Over the past several years, FORCE BLUE has been involved in a number of relief missions, including response to hurricanes Irma and Maria. 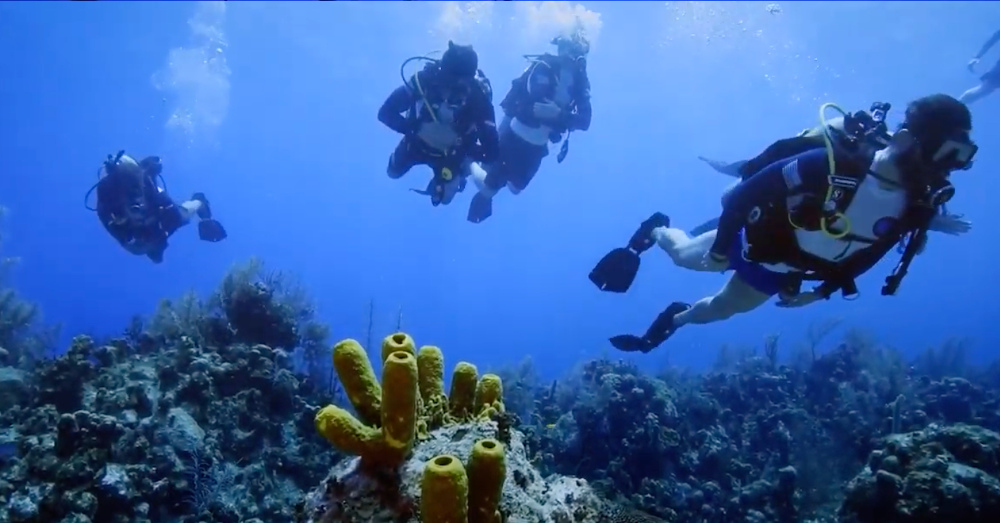 The organization includes some of the most highly trained underwater and maritime operators in the world, representing millions of dollars in government investment. And, not unlike the US Marine Corps, FORCE BLUE was also conceived in a discussion at a bar. 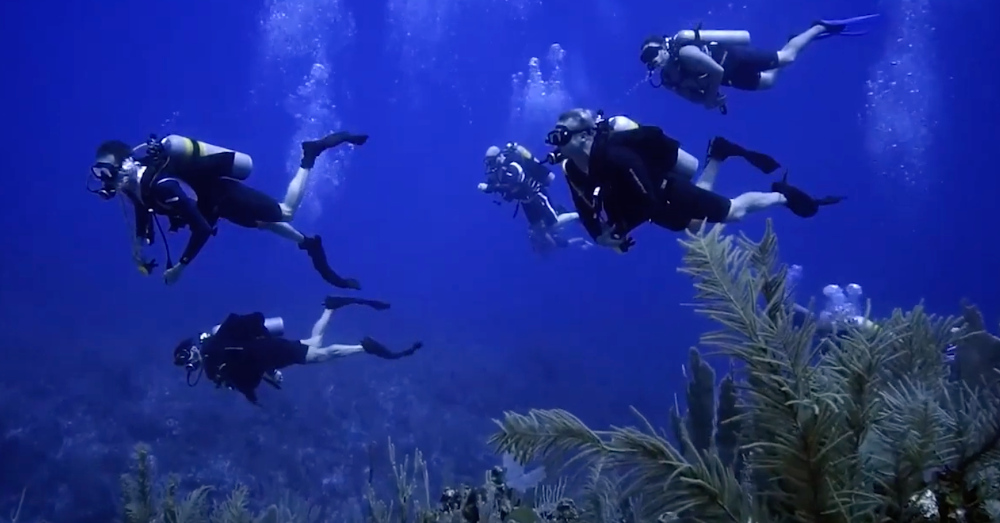 Source: YouTube/FORCE BLUE
FORCE BLUE is the only nonprofit in the world that retains and redeploys former Special Operations veterans.

“The idea was written down on a napkin in Grand Cayman,” Fiori says.

FORCE BLUE’s three co-founders were Jim Ritterhoff, a marketing facilitator; Keith Sahm, a 23-year veteran of marine environmentalism and a scuba diving resort general manger; and Rudy Reyes, a recon marine. All three were experienced divers, but unlike Ritterhoff and Sahm, Reyes saw no recreational benefit in the pastime. To him, it was simply the nature of another potentially dangerous mission, which may have served as a way of helping the veteran face his fears. 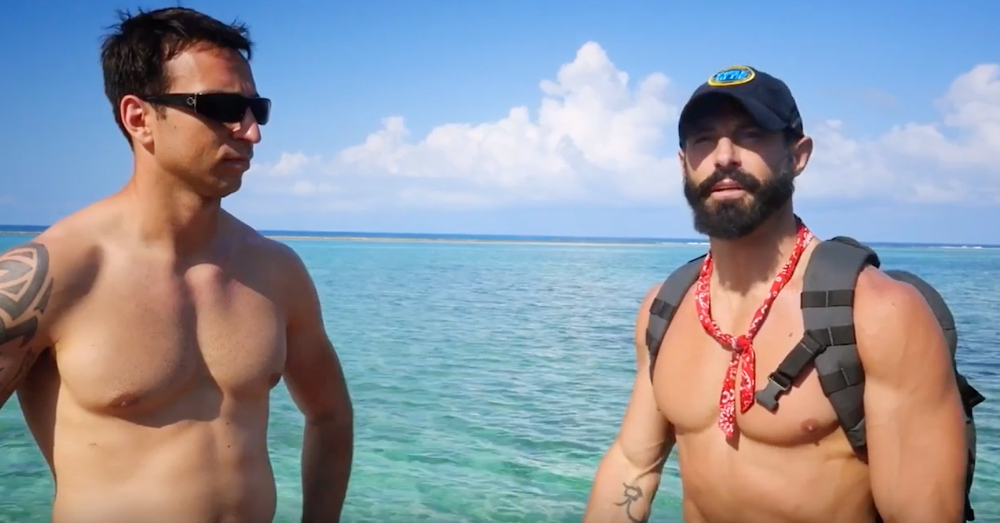 Source: YouTube/FORCE BLUE
Veterans like Rudy Reyes (right) have found relief from the symptoms of PTSD in diving with FORCE BLUE.

“He had never taken the time to really actually enjoy the environment around him because he was always so focused on the mission at hand, pushing 200 pounds of gear at nighttime, in the open ocean,” Fiori said.

Reyes had no problems carrying his oxygen tank, but the invisible scars of post-traumatic stress were a much heavier burden.

“He was in the early stages of Iraq, the Independent invasion,” Fiori said. “He went through a lot of trials and tribulations, and Rudy was at a bad place years later.” 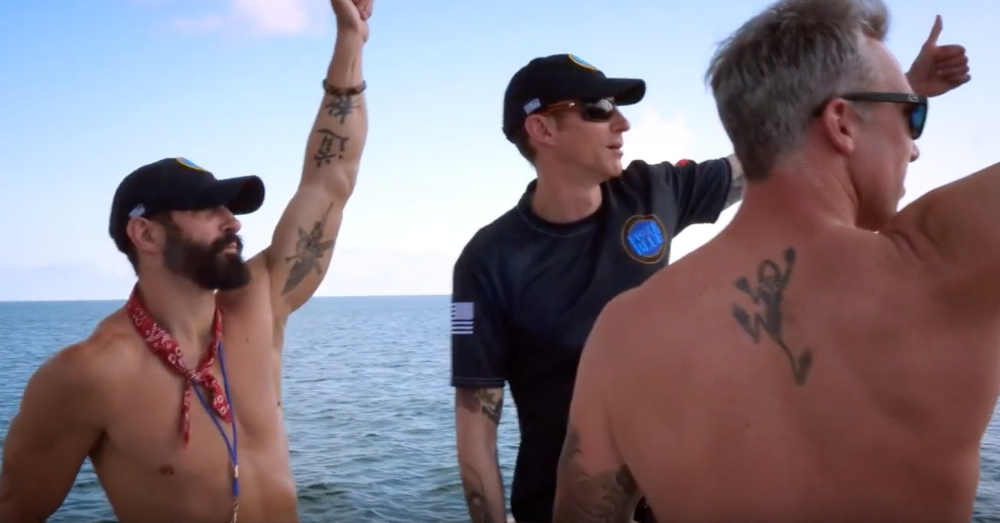 Source: YouTube/FORCE BLUE
Many FORCE BLUE team members share the bonds of combat veterans, and support each other in the same way.

In Grand Cayman, Reyes found a new way to deal with fear and frustration thanks to friends Ritterhoff and Sahm.

“It was very therapeutic,” Fiori said. “He was blown away by the beauty of the ocean. And he came up and said, ‘we got to do this for all of all the combat veterans, because this is so just so relaxing.'”

Along with combat divers from all branches of service, FORCE BLUE involves marine scientists, conservationists and journalists. 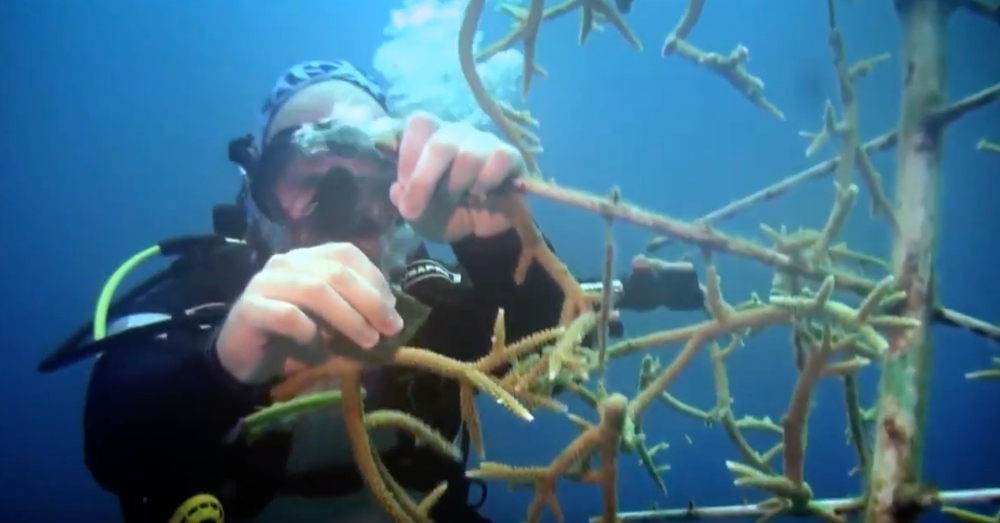 The group is now embarking on its newest project, 100 Yards of Hope, in recognition of the NFL’s 100th season. Fiori says dives will see the combined efforts of FORCE BLUE and UDT/SEAL Association divers with scientists from the University of Miami’s Rosenstiel School of Marine and Atmospheric Science, the Phillip and Patricia Frost Museum of Science, and the Florida Department of Environmental Protection. 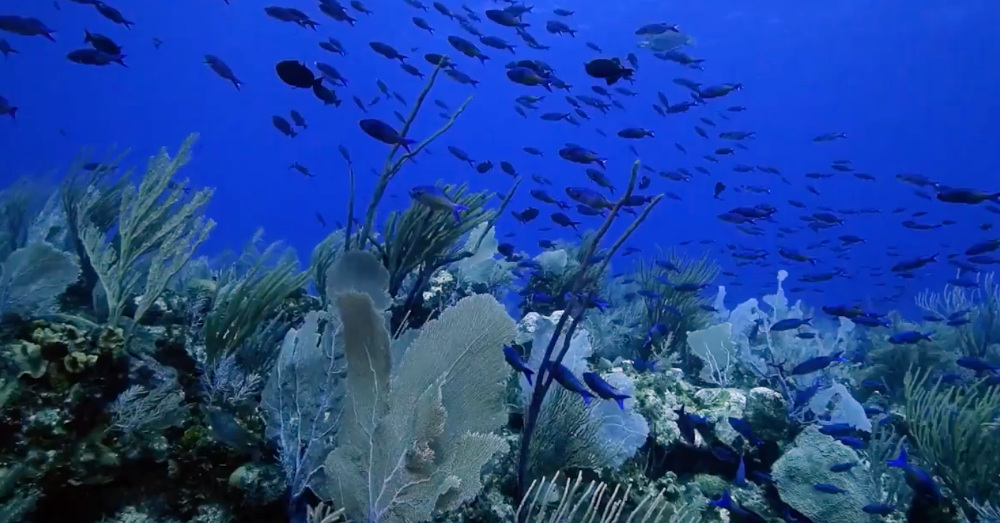 Source: YouTube/FORCE BLUE
100 Yards Of Hope will focus on coral near Biscayne Bay.

“It’s to restore a football field stretch of coral off the waters of the Bay of Biscayne,” Fiori says, adding that the project grew out of an initiative that involved planting 100 small pieces of coral last June, two months after the NFL and Miami Superbowl Host Committee approached FORCE BLUE about leading a historic coral reef restoration project in honor of the NFL Centennial and Super Bowl LIV.

“When the Super Bowl comes to town, it always leaves behind a project. This was part of the preparation for Super Bowl 54.”

Scientists monitoring the 100 transplanted corals were pleased to see them integrate into the natural habitat. The fact that the reef is growing and thriving provides both hope and framework for a the next restoration project, restoring a 100-yard section of Rainbow Reef, a small reef off of Key Biscayne. 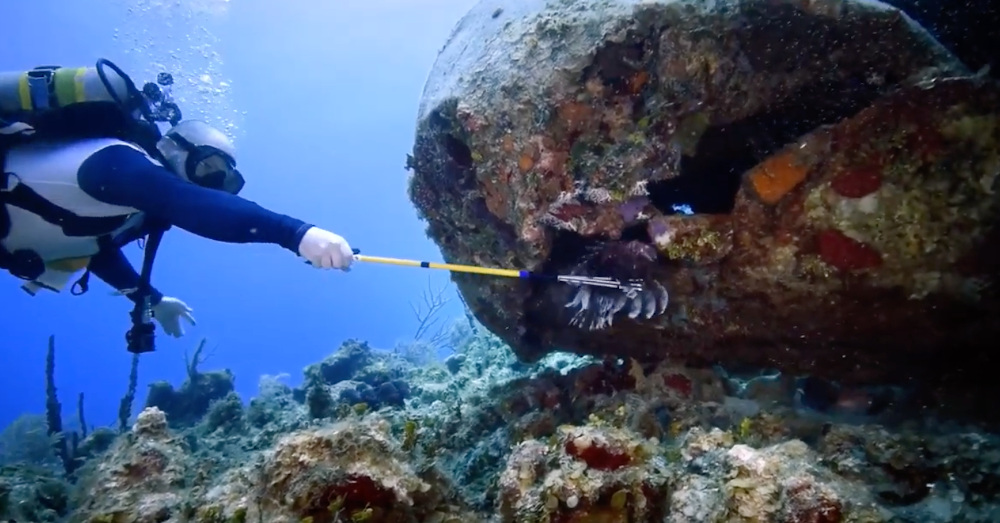 Source: YouTube/FORCE BLUE
FORCE BLUE is getting support from public and private organizations, including GreaterGood.org, to help complete the 100 Yards of Hope project.

The project is being supported by public and private sector partners, including the Florida DEP, National Oceanic and Atmospheric and Atmospheric Administration (NOAA), GreaterGood.org, Free the Ocean, and the Professional Association for Diving Instructors (PADI).

Fiori says it’s exciting to be working with such a motivated team and for the opportunity to launch a donation platform through GreaterGood.org to fund critical conservation projects.

“It will help citizens to get involved,” Fiori said. “For just as little as $25 you’ll be able to sponsor a FORCE BLUE veteran and help fund the coral replanting.”

Learn more about FORCE BLUE in the video below, and scroll down to make a difference.

100 Yards of Hope: Help Veterans Save Our Oceans 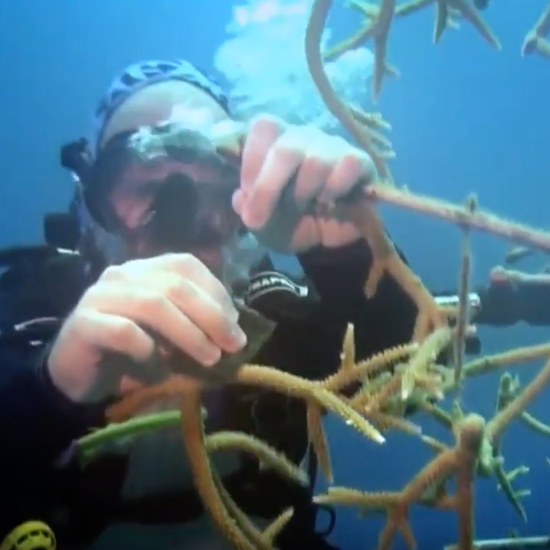 After serving their country with pride, a team of elite Special Operations veterans is ready to do more. Their new mission begins with helping to preserve and restore one of America’s most valuable resources — Florida’s Coral Reef.

Our veterans continue to fight for our nation. Help them win this battle. Donate today!