After A Long Flight Sitting Next To A Stranger, Soldier Arrives At Hotel Where A Note Was Waiting

A man named Brad was sitting on a plane, waiting for it to take off, when he glanced up and noticed a soldier in uniform walk aboard. The soldier made his way through the cabin and found an empty seat next to Brad.

Brad greeted the soldier, whose last name was Glascott. The two struck up a conversation throughout the rest of the flight.

Glascott explained that he was on leave and headed home to his family. He had plans to take his family to the Great Wolf Lodge, a hotel and water park, for his son’s 9th birthday. The soldier wanted this party to be one his family would remember for years to come.

At the front desk, Glascott was met with an unexpected surprise. The soldier’s account was flagged. The receptionist made him wait as she figured out why. 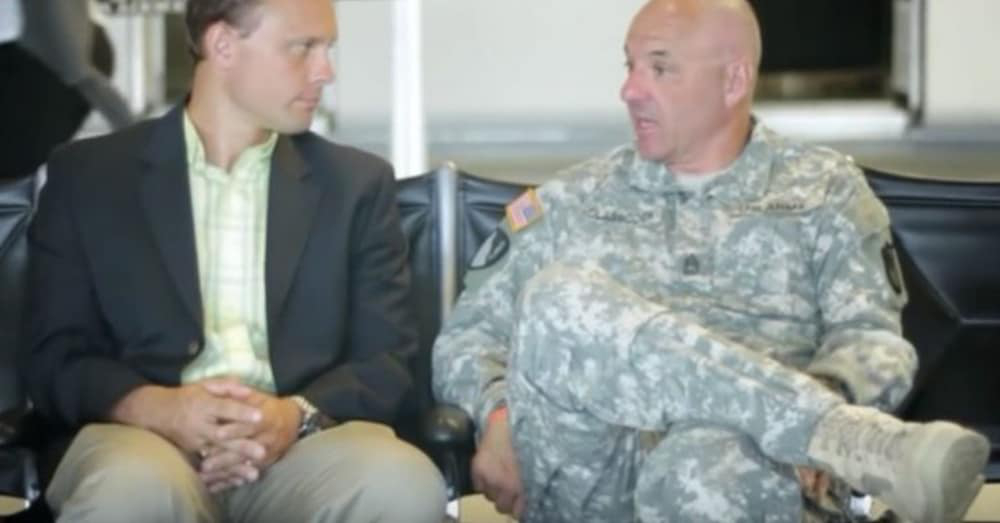 A soldier met a business man on his flight home from deployment.

Glascott was worried his reservation wasn’t held. He thought his plans might have been waylaid, and was nervous about what he may have to tell his family.

That’s when the receptionist responded, “You have a message on your account from Brad.”

It didn’t make sense at first. Glascott had no close friends or family named Brad. He and his family were both confused.

As it turns out, the note was left by Brad from the flight. He simply wanted to send his good wishes to the family from Atlanta.

It wasn’t just well wishes that Brad left, however. The receptionist had more to reveal.

As Glascott pulled out his credit card to pay, the receptionist stopped him.

“Your money is not good here, soldier,” she said.

Glascott became even more confused. He had never been turned away before. That’s when the receptionist clarified her point.

“I didn’t mean it like that,” she said. “Your account has been paid. In full. Brad wants you and your family to enjoy your stay at Great Wolf Lodge.”

The Glascott family was blown away by such a selfless gift. The soldier’s eyes began to water with tears of joy. The gift of a complete stranger had truly made this celebration one to remember.

Perhaps the happiest of all was Glascott’s son, who now had more time to spend with his father.