Recently I wrote an article about Hershel “Woody” Williams and how he was awarded the Medal of Honor for his actions on Iwo Jima during WWII. Woody is still very much alive and was present at the recent commissioning ceremonies for a new ship named in his honor. You will see him speak in one of the videos included in this piece.

The new ship, the USS Hershel Woody Williams (ESB-4), is the second of its kind to be commissioned by the United States Navy. And it is a unique ship in design and function, as you will see in this video. The ESB stands for Expeditionary Sea Base, and was formerly known as an Afloat Foward Staging Base. It will be assigned to the 6th Fleet operating in the Mediterranean Sea this summer.

What makes these ESB ships unique is both their design and their function. They are intended to be a direct transportation and delivery system for United States Marine Expeditionary Units. Hence their unique design. They have two functional decks. The top deck is a flight deck that lands and launches CH-53 Sea Stallion heavy lift support helicopters for supplying the Marines ashore, and MV-22 Ospreys to deliver troops to shore and back. 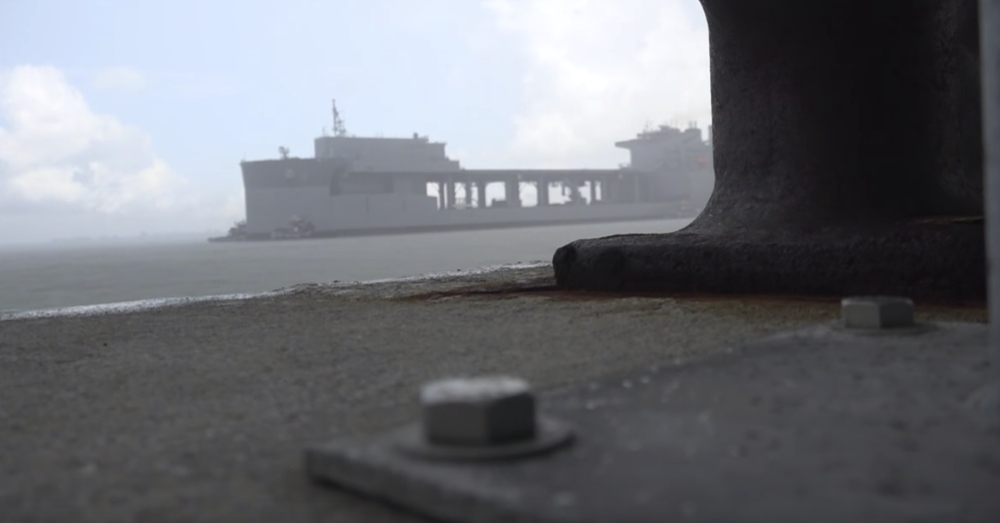 
The lower open deck is designed for launching and berthing small boats, the kind of boats that can deliver small teams of Marines on several kinds of missions. This two deck design gives these ships a very unique look. And it is a big ship. It is so big that when it was transferred from San Diego to Virginia, it had to go around Cape Horn in Chile as it was too big even for the newly enlarged Panama Canal. 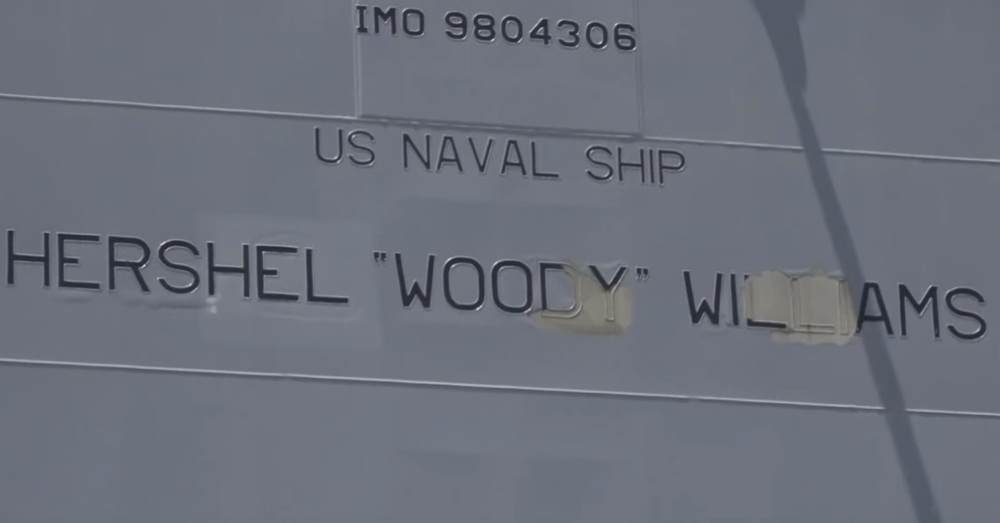 Source: YouTube/13News Now
The ship bears the name of a living WWII Medal of Honor recipient.

As mentioned above, Williams was present at the recent commissioning ceremonies. He was quoted in an article on Military.com as saying, “Receiving the Medal of Honor is the top man-made miracle in my life. But this ship that bears my name and will sail the seven seas to protect America for many years to come is close to the top.” 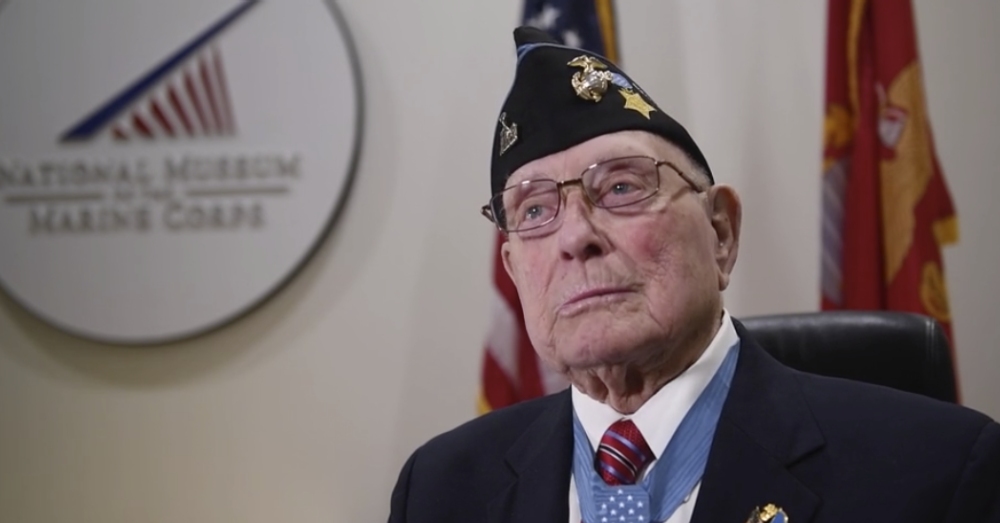 Source: US Marines
Hershel “Woody” Williams served as a Marine in WWII, and fought in the Battle of Iwo Jima.

Williams received the Medal of Honor from President Harry S. Truman after the end of WWII. At the commissioning ceremony he surprised the crew and all in attendance when he gave his Medal of Honor to the crew of this new ship. It was an overwhelming moment for the crew.

Command Senior Chief Petty Officer, Tiffanie Simpson said of the gesture, “There were a lot of teary eyes. It is a monument to how humble he is and was a moment I’ll never forget.” 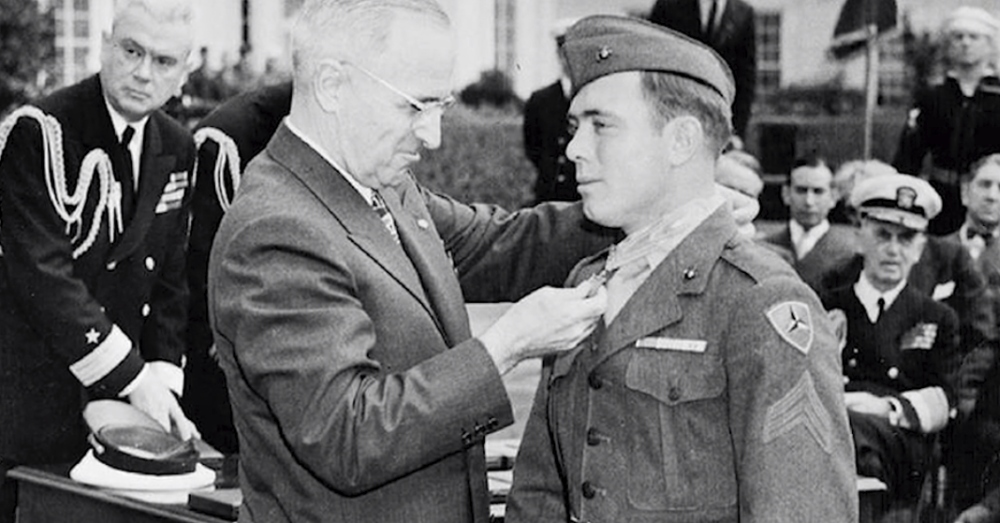 Hershel Woody William’s Medal of Honor is now enshrined in the ship’s galley.

The ship’s motto is: “Peace we seek, peace we keep.” That motto was created by Williams himself.

He said, “It is my hope that all wars will recede and there will come a time when sacrifices of life made by our armed forces will no longer be necessary.” 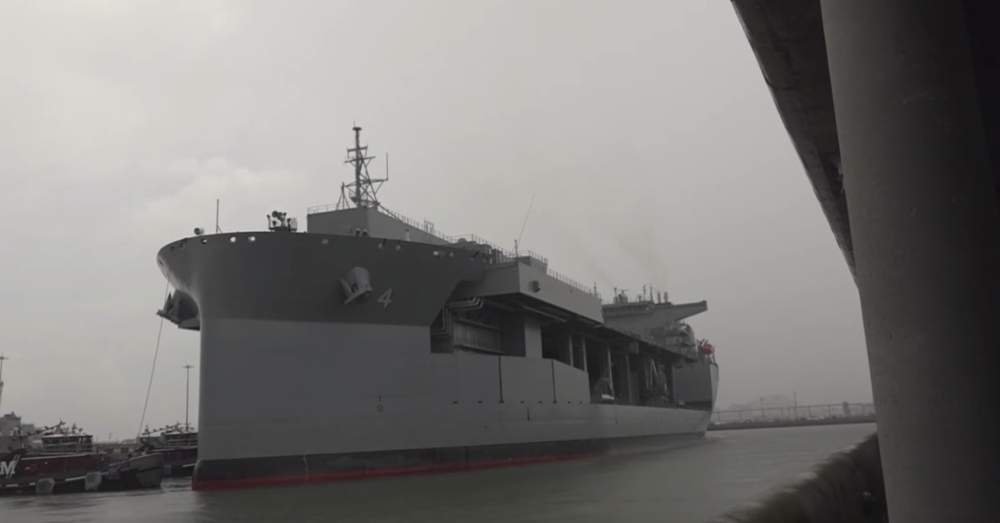 Source: YouTube/13News Now
This ship is ready for duty.

In saying this he has echoed the hopes of all who have served in combat. That future generations will not have to go through what they had experienced. But it is also a recognition of reality, that if and when the need arises, we will sacrifice and do what is necessary to seek and to keep the peace.

The Veterans Site thanks Hershel “Woody” Williams for his courage and his humble service to the nation. We are thrilled that this new Marine Expeditionary Sea Base ship will be named after him. To the officers and crew of the new USS Hershel Woody Williams (ESB-4), we wish you all “Fair Winds and Following Seas.”

When A Blind Veteran Was Stranded In The Hospital, He Worried...