It seems as if all we are hearing is negative news. We realize that the coronavirus pandemic is a serious problem, but there has to be something positive happening in the world, somewhere! We’ve had enough of hearing how many fatalities occurred on that day or the fact that we may be in quarantine for months.

When you look under the surface, you might be surprised by how much good is actually taking place. Some people are even going out of their way to share a smile with others. John Krasinski is a YouTuber who has started a campaign that is fully dedicated to good news. In every segment, he speaks about positive stories that are designed to make you happy.

That is where a 96-year-old war veteran named Guy Whidden comes in. As a former WWII paratrooper, he didn’t know how to start his own YouTube channel but he did know something that was very positive, how to get a haircut as a Mohawk style.


Whidden had cut his hair as a Mohawk before, and it was right before D-Day in 1944. Many people were doing it at the time, perhaps to intimidate the Germans.

Even though he may have had good intentions when getting his first Mohawk, they told him he had to shave it. Since that time, he wished he had a Mohawk again but the time wasn’t right until now. He thought that many people were dealing with a new sense of “normalcy” so he would do what he could to put a smile on their face. 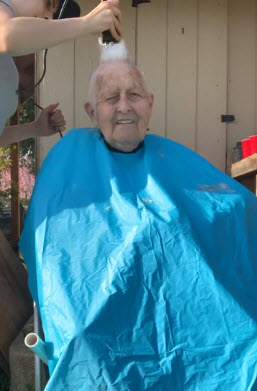 “I knew it would draw some laughs,” Whidden said. “And I don’t have much to do like most of us penned up in our homes.”

Lydia is his granddaughter and she was the one shaving his head. He filmed himself getting the haircut as a Mohawk and it has gained a lot of attention. Lydia even put a green hair clip in his hair to hold it back while she did the work.

“I feel like a young buck!” Whidden says in the video.

He decided to do this to spread something positive but he didn’t know it was going to gain quite so much attention. Tens of thousands of people ended up watching the video on YouTube and many have even given themselves a haircut during quarantine, thanks to what they saw.

“I just thought it would make a happy moment,” Whidden said. “If I can get people to laugh, it makes my day for me, especially in this period of time. It’s very difficult for a lot of people.”

You can see it for yourself in the following video:

Traveling Vietnam Veterans Memorial Vandalized With Hammer: Click “Next” below!

10 Tips to Shopping for a Car

WWII Veteran Gets Final Wish Granted: To Be Buried In A...