This Marine stood only 5’6″ and weighed in at only 130 lbs., but he had more heart and just plain raw courage than the entire Chinese Army unit in front of his position at Inchon in November 1950. His name was 1st Lt. Kurt Chew-Een Lee, USMC and you need to know his story.

You will see him and hear him in this video. He is soft spoken, but he gives the details of the battle he was engaged in over two days, November 2-3, 1950, during the early part of the Korean War. It would seem an unbelievable story, but for the fact that it was and still is all too real.

It was night time. The Chinese had opened up on the Marines with everything they had. It was as if 1st Lt. Lee and his men from Baker Co. 1st Bn, 7th Marines were suddenly in a roiling bubble of chaos, noise and shrapnel. Shells were exploding all around. Then everything went eerily silent. 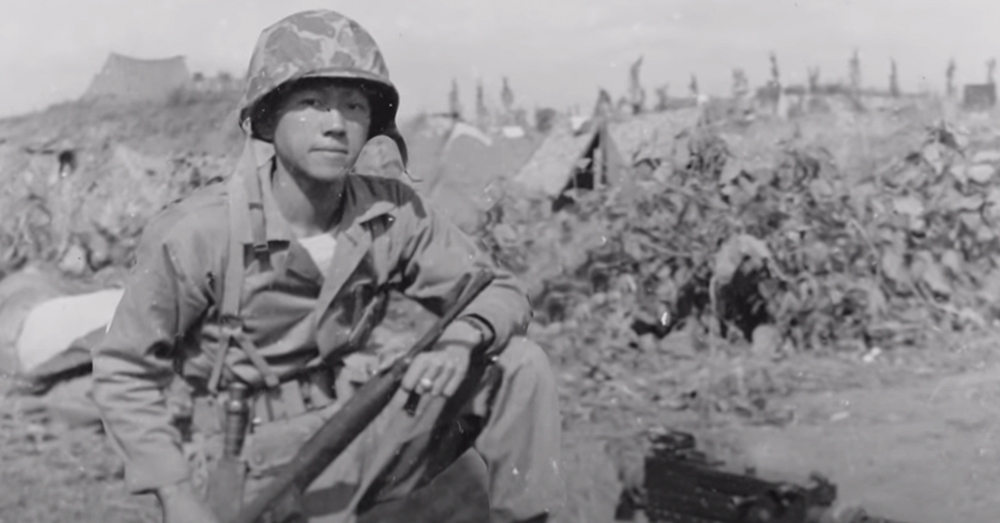 
They knew that they had a large enemy force in front of them but in the darkness they could not see them. Lee decided that there was only one way to get them to reveal themselves; he would have to get them to open fire to reveal their positions to his Marines.

Lee says in the video that when you are in this kind of position the only thing to do is to, “always keep moving forward.” He advised his machine gunner and his riflemen to focus ahead and then, alone, he started moving fast, radically and continually shifting his position. He kept moving erratically in the dark, always moving toward the enemy. He would fire his carbine at different rate patterns and from different positions, as well as throwing grenades, giving the impression to the enemy that the Marine unit was charging toward them.

The result, of course, was that the Chinese opened fire and in doing so they began to reveal their positions. Now Lee’s Baker Co. Marines could see where they were and could begin targeting them as well. 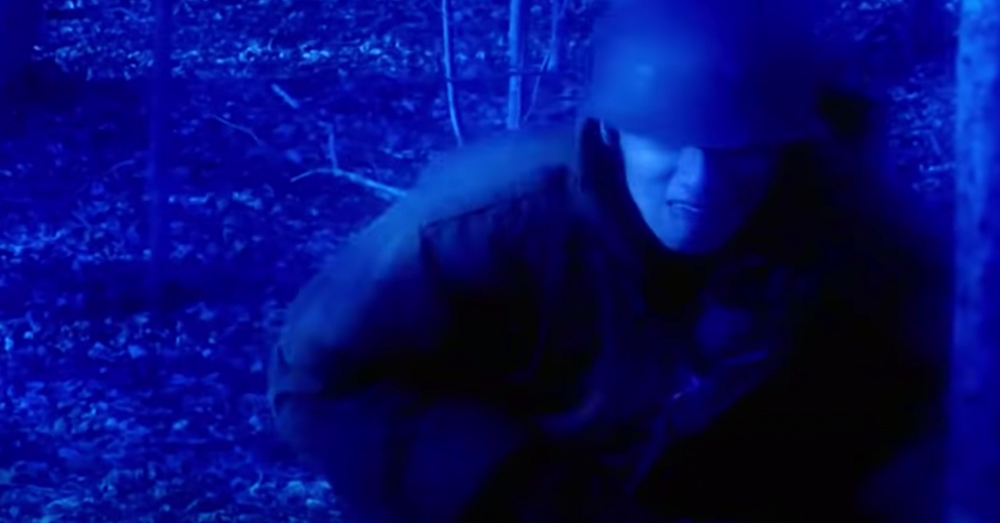 Source: YouTube/
Smithsonian Channel
Chew-Een Lee took on a Chinese Army unit by himself, and forced them to back down.

Lee kept moving forward. He then employed a weapon none of the other Marines could; he started speaking to the enemy in Chinese. This distraction gave him enough time to throw his last two grenades before spraying full automatic fire with his carbine, shouting as if he was leading his Marines forward. Then he heard a whistle being blown. He kept moving forward.

As he got to the Chinese position all he saw was scores of dead enemy soldiers. The rest had retreated and abandoned their position before the audacious charge of this one man, 1st Lt. Lee.

In those actions he was transformed from a leader to a legend in the minds of his Baker Co. Marines.

As a result of his actions in that battle, 1st Lt. Lee Chew-Een Lee became the first Chinese-American Marine to be awarded the Navy Cross, the second highest award for valor that a Marine can be given. 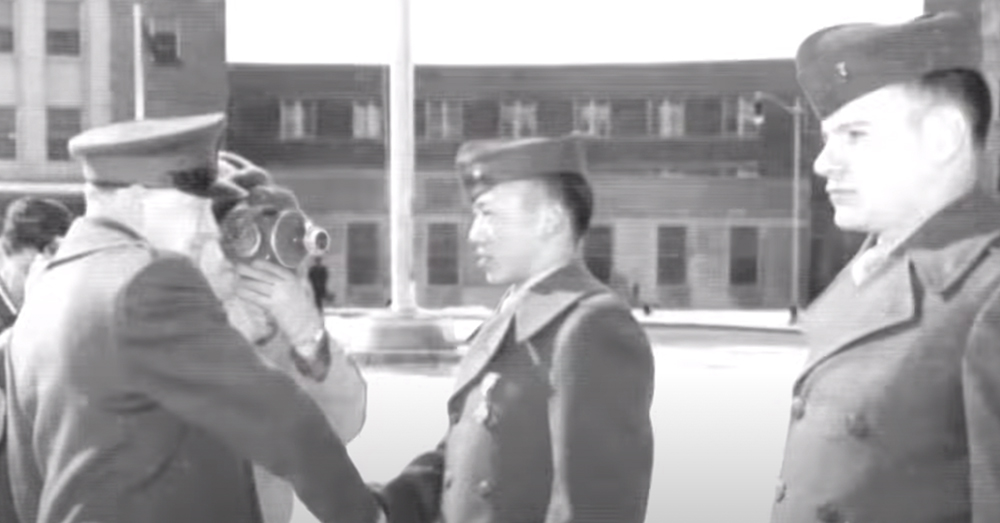 Lee was wounded in the knee and hit in the elbow by a sniper during that battle. He was later evacuated to an Army field hospital. He was treated for five days when he learned he was going to be sent to Japan for recuperation. He didn’t like that news. He and another wounded Marine commandeered an Army jeep and drove back to his unit. They had to walk the last 10 miles when the jeep ran out of gas.

Lee would see action again at the Battle of the Chosin Reservoir. After two days of fierce fighting, Lee’s platoon was given the mission to relieve the outnumbered Fox Co. 2nd Bn, 7th Marines trapped at Fox Hill, part of the Toktong Pass. This was in -20 degree weather and snow. As point man of the 2nd Rifle Platoon of Baker Co. in the midst of blizzard conditions, Lt. Lee could only use his compass to guide him to the objective.

They came under an intense ambush from the Chinese above them. But Lt. Lee had a mission and he was not going to be prevented from fulfilling it. He directed his platoon to attack the hill with “marching fire,” applying just enough suppressing fire to keep the enemy’s heads down. When they got near the top of the hill they charged, rushing the enemy even in their foxholes. 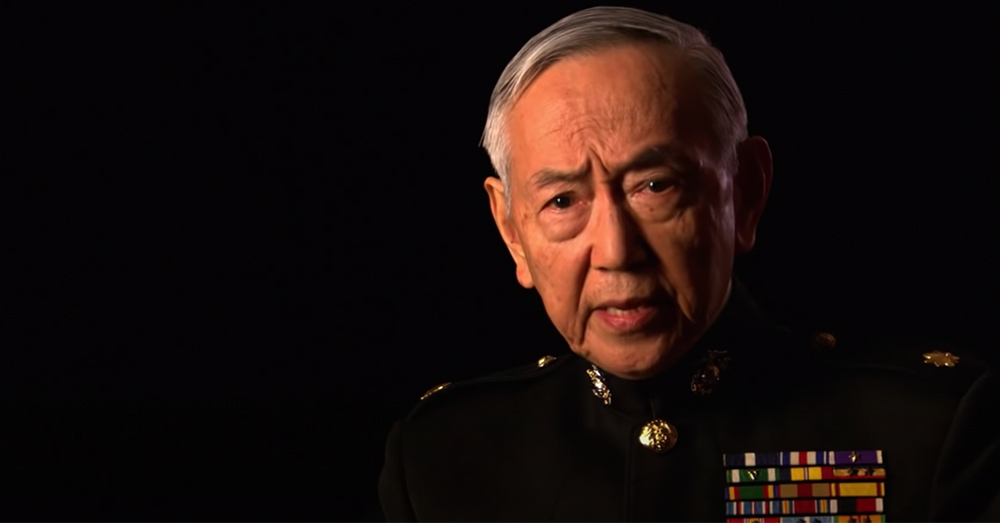 Remember, Lee was still recovering from his wounds in the previous battle at Inchon. He still had a cast on his right arm. This did not stop him from shooting two enemy soldiers on his way to the top.

As they crested the hill, they noticed that the other side of the hill was dotted with enemy foxholes facing the other way, but they were empty. The Chinese, retreating headlong in front of them, were now already 400 meters away. During the fight, Lee was hit again by a bullet just above the cast on his right arm. But the end result was that they had secured the road at Toktong Pass.

Days later Lee would be hit again by machine gun fire. This time he would be sent home. Lt. Lee was awarded the Silver Star for his actions at Toktong Pass.

Lee retired from the military in 1968 as a Major. He would work in insurance with New York Life Insurance Company for seven years. Then, as a compliance coordinator for the National Rural Electric Cooperative Association for 20 years. He died on March 3, 2014 at the age of 88.

The Veterans Site honors the memory of this heroic Marine, Maj. Kurt Chew-Een Lee. He inspired his men in Korea and throughout his military career and he continues to inspire us today. Semper Fi, good Marine! OooRah!

C’mon, America! Let’s Take a Dive Off the Fiscal Cliff

Veteran Reunites With His Dog That Saved His Life After Suffering...