On more than 300 combat missions, U.S. Marine Byung “BK” Kang and his black Labrador retriever Blue worked to detect improvised explosives in Afghanistan. Bomb detection is a dangerous job that requires skill and nerves of steel.

Lucky for BK, Blue is a natural. The pair found an IED on their first mission together, Today reports.

“That IED could have taken a couple of our guys out,” Kang, 31, told Today. “So from there, Blue started getting trust and the respect of my platoon.” 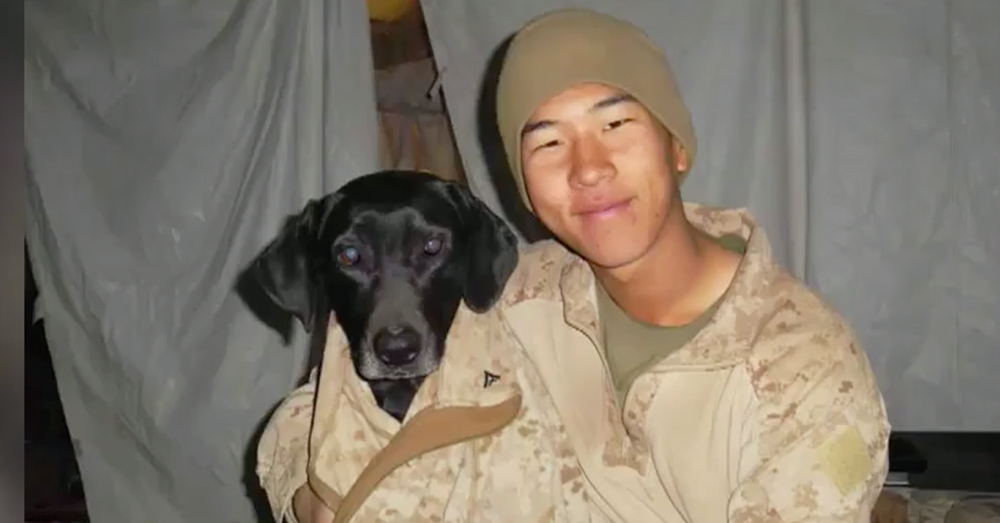 Kang learned how to read Blue’s body language when he sensed an IED nearby. She would hunker down, indicating an explosive was likely buried ahead, and Kang would reward him with a toy.

“Since we knew Blue is effective, it was almost impossible for a squad or a platoon to go out without Blue,” Kang said. “Sometimes we went on three patrols per day and by the time we’d get back we’re all exhausted because we’ve been walking miles and miles in over a hundred degrees of heat in Afghanistan. So we did our best. Every chance, we tried to go out to possibly save the Marines and sailors.” 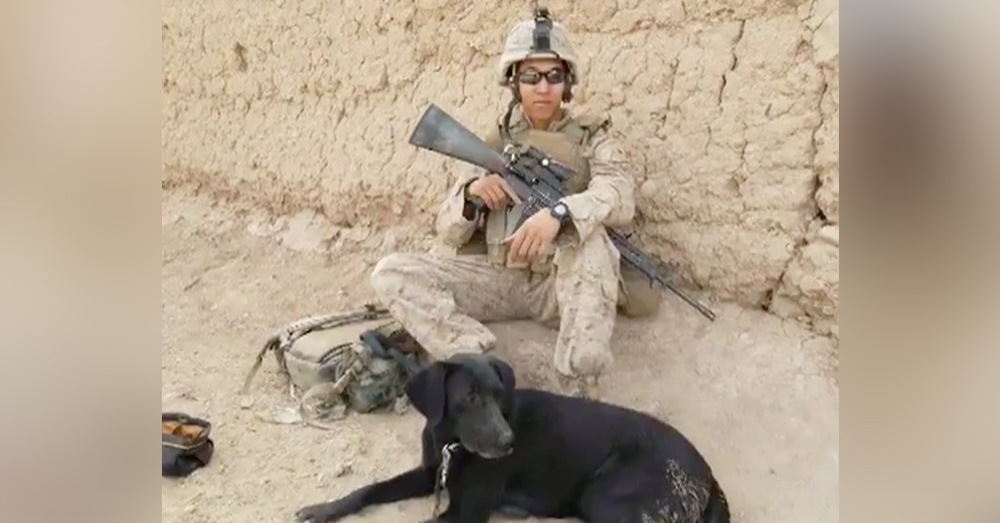 Blue and Kang became closer with each mission together. They spent their days together scouring the desert, and nights together sleeping in Kang’s bunk.

As Kang’s service began to wind down, he knew that Blue would not be going home when he did. But he didn’t want to leave his friend behind.

“I told her, ‘What you’ve done for me and my guys over here in Afghanistan, we cannot pay back. So I’m going to give you a good home where you can cuddle all day, not worrying about going to war and finding bombs.’” 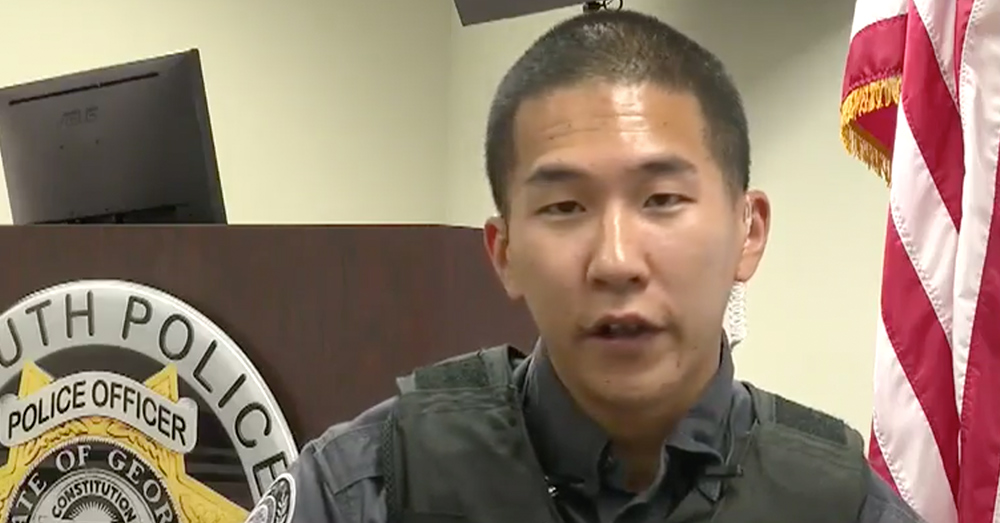 Source: Facebook/Duluth Police Department
Kang left the military in 2012 and became a police officer in Duluth.

Blue was reassigned to a different handler when Kang received his discharge papers, but Kang never forgot him. The dog was all he ever talked about. Kang even brought Blue up in one of the first conversations with his future wife, Wendy. He said he intended to adopt Blue when he was retired from the military.

Blue’s retirement day eventually came, six long years after Kang had gone home. Stateside, Wendy Kang, also a former Marine, got in touch with her military colleagues to find out where the dog had been sent. She impressed her husband by tracking Blue down and bringing him home in November 2018.

“I did everything in my power to make sure that we could get Blue home,” she told TODAY. “After all the stories I’ve heard, I know for sure Blue is one of the reasons why BK is standing here with me and he’s alive.” 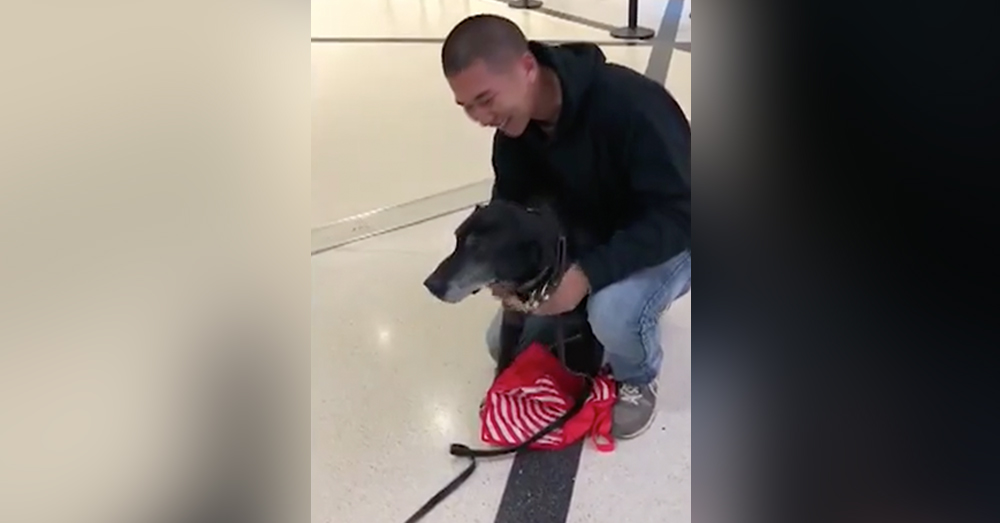 Source: Facebook/Duluth Police Department
Blue and Kang were reunited in 2018.

Blue fits in well with the Kang family, where he now lives with five other dogs, two cats, and the couple’s two sons. He is still an inspiration to the Kings and military families everywhere. In fact, this year the Kings nominated Blue for the 2020 American Humane Hero Dog Awards. Blue is a semifinalist in the military dogs category, and still garnering votes. 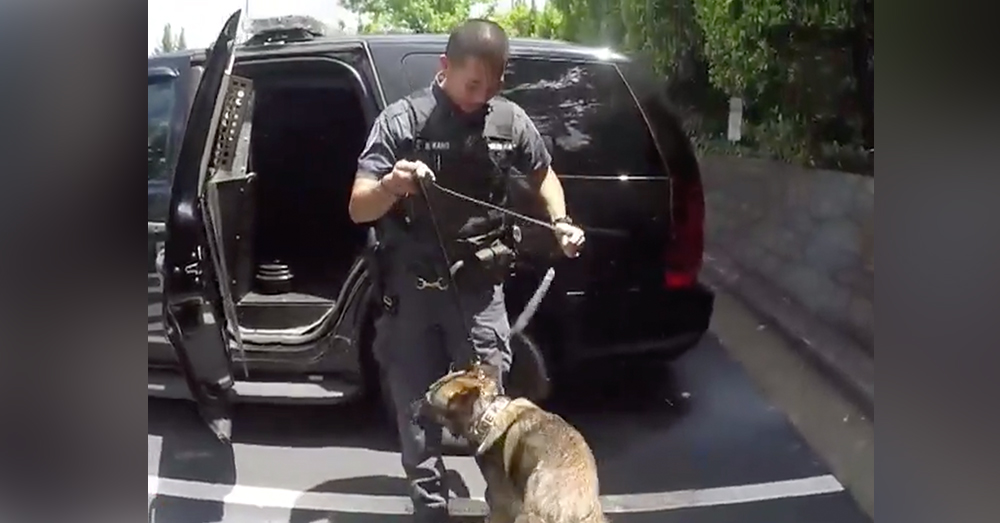 “These working dogs, they will give up their life for us,” Kang said. “So we should be thankful to them and respect them and above all, trust the dog because dogs will not lie.”

Black Service Members Underrepresented In Military Leadership: Click “Next” below!