This short video tells two stories, one about how U.S. Marines, needing a more efficient and mobile machine gun to support advancing Marines on the jungled battlefields of the South Pacific islands, cannibalized parts from three existing weapons to create just what they needed. They took an aircraft machine gun and added an M-1 Garrand rifle butt, and bipod/handle combination. This made it lighter than the Browning M-1919 that could shoot rounds twice as fast.

They called it the “Stinger.”

More importantly, the video is about one of the six Marines that were issued the Stinger and who used it to incredible effect, especially during the battle for Iwo Jima, so much so that one of those six Marines was awarded the Medal of Honor. His name is Cpl. Tony Stein.

You will see how the stinger came to be and why in the first part of the video, but the last part of it is about Cpl. Stein’s uncommon valor during the bitter fighting on Bougainville and later on the island of Iwo Jima. 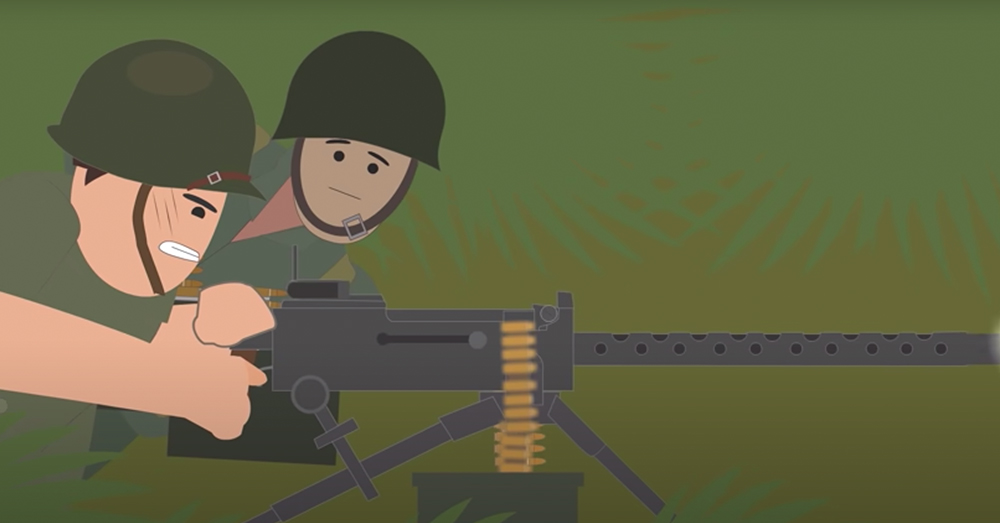 Source: YouTube/Simple History
The Stinger was a powerful weapon in the battle of Iwo Jima.

Tony Stein was a Jewish kid from Dayton, Ohio and was an apprentice tool maker. His tool making job was an essential skill for the war effort. Just as he was turning 21, in September 1942, he decided to enlist in the United States Marine Corps. After boot camp he was assigned to a unique Marine Corps unit at the time, a parachute unit, 3rd Parachute Bn, 3rd Marine Division nicknamed, “ParaMarines.” But the unit was disbanded early on because the war had created transport plane losses and because they were being taken up for other uses.

Stein was promoted to Corporal and was assigned then to Alpha Co. 1st Bn, 28th Marines, whose motto was, “Uncommon Valor.” He proved to be, just that, a man of uncommon valor, in several of the island battles in the South Pacific.

On Bougainville, Stein became known as the sniper killer. The Japanese snipers would often set up their nests high up in the jungle canopy and Stein had a keen eye for spotting them. He was credited with having killed 5 Japanese snipers during the fight for Bougainville. 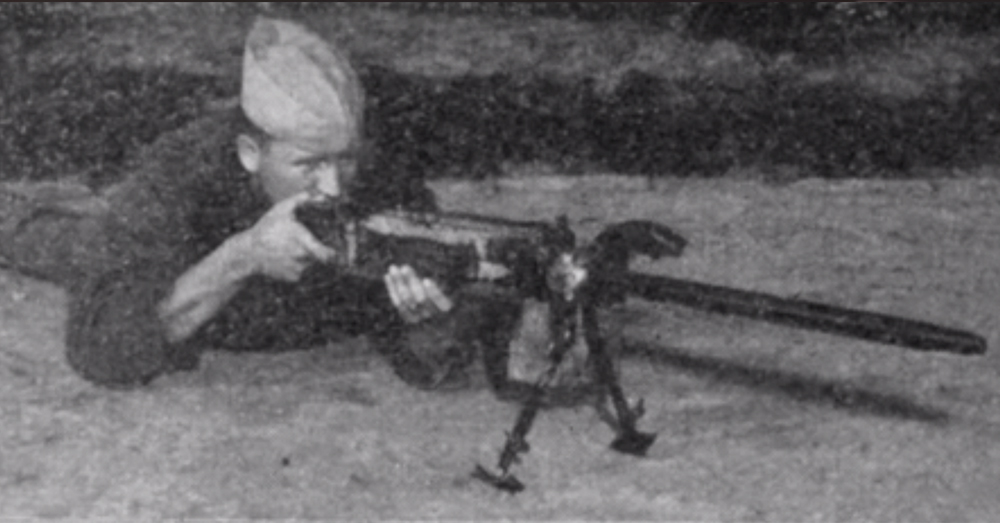 Source: YouTube/Forgotten Weapons
The Stinger was a combination of parts from three different guns.

By the time that the battle for Iwo Jima came around, regular Marines in the field had come up with this new weapon, the Stinger. They had built a handful of the new Stinger machine guns, a total of six, and these were issued to six Marines going ashore. Cpl. Stein was one of those Marines landing with his unit in the fourth wave on the beach below the summit of Mt Suribachi.

When Stein left his landing craft at the beach he somehow lost his helmet. He went forward with his unit anyway and was personally responsible for eliminating several Japanese defensive pill boxes enabling his Marines to continue moving forward. 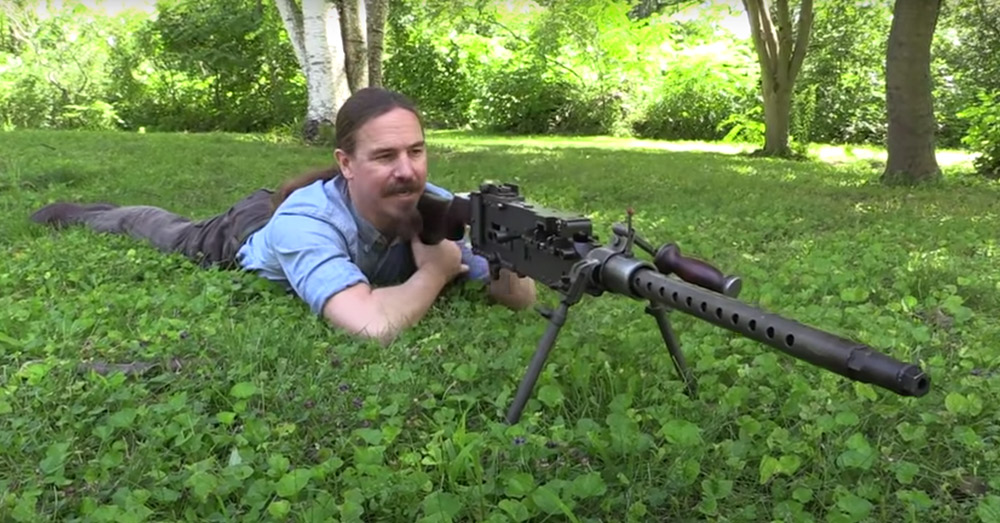 Source: YouTube/Forgotten Weapons
The gun could be used in a prone position.

Each time he ran out of ammunition, he had to run back to the beach to get more, and each time he would carry, drag or help a wounded Marine back to the beach with him. He even had removed his boots so he could go faster in these efforts. He did this a total of eight times. He was credited with taking out over 20 enemy soldiers and multiple defensive positions with his Stinger, thereby saving the lives of many of his Marines.

At one point Stein’s unit ran into particularly heavy fire from a Japanese pill box. Stein helped direct the fire from a Marine armored vehicle and then went forward and took out the remaining Japanese in the fortified position. At one point he was wounded by shrapnel in the left shoulder. He was taken back for treatment to a hospital ship where, after being treated and resting for a while, he heard that his unit was being hit hard and he went back to be with them. 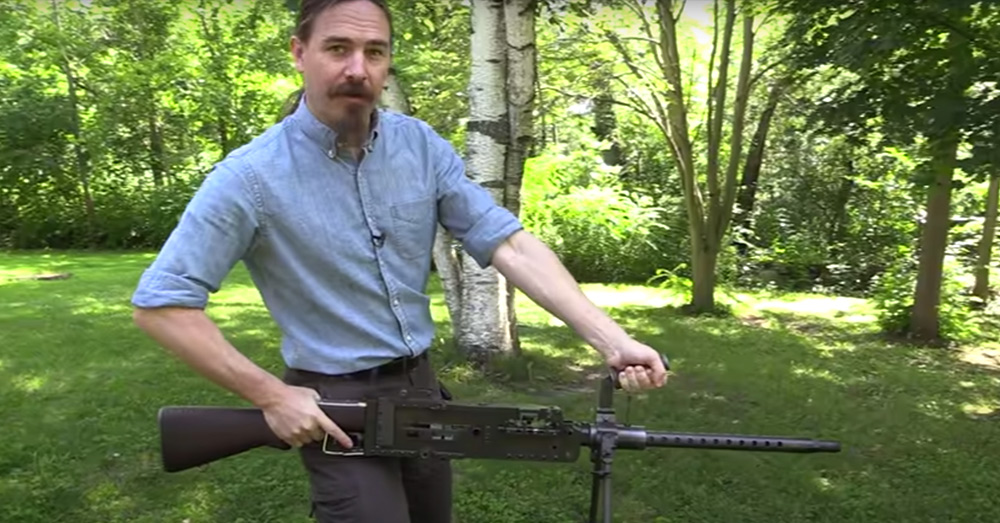 Source: YouTube/Forgotten Weapons
The Stinger was also effective when used from the hip.

While out with a small Marine patrol searching for other enemy positions Cpl. Stein was killed by a Japanese sniper.

For his actions that day, Stein was awarded the Medal of Honor posthumously. His wife received the award from President Harry S. Truman at the White House.

This story is illustrative of both the uncommon valor of Cpl. Tony Stein, but also of the ingenuity of your basic Marines. They had a problem of not having a weapon that they needed in the unique jungle and mountainous terrain fighting they encountered in the South Pacific, so they engineered one on their own, the Stinger.

The Veterans Site honors the uncommon valor of Cpl. Tony Stein and are humbled by his commitment to his fellow Marines. He is the embodiment of the Marine Corps motto: Semper Fidelis! OoRah!