Mae Krier was just 17 when she supported the war effort for our men overseas. On the factory line at Boeing’s Seattle plant, Krier helped build B-17s and B-29 bombers, keeping stateside industry afloat while critical resources were sent to the Allies embroiled in World War II.

Women like Krier became the lifeblood of the national economy during WWII, symbolized and galvanized by images of “Rosie the Riveter”

Now 94, Krier is still serving her country. True to her roots, she’s keeping Rosie in the picture, too. The nonagenarian is making Rosie-themed masks to help her fellow Americans halt the spread of coronavirus disease (COVID-19). 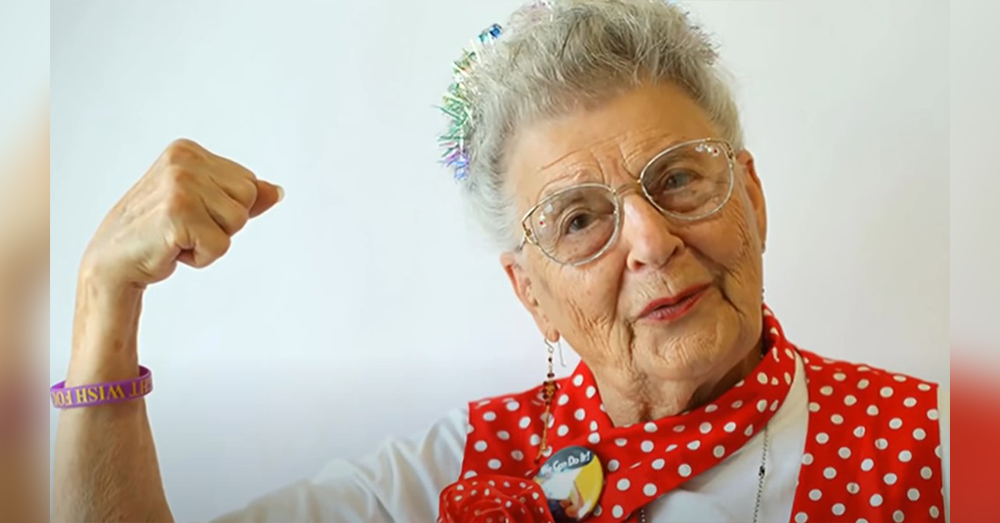 “This virus is actually like another war, and we’ve gotta pull together if we’re gonna conquer it,” Krier told A Mighty Girl. “We did it, and we can do it.”

“Someone put it on Facebook and it’s sky-rocketed,” she says. 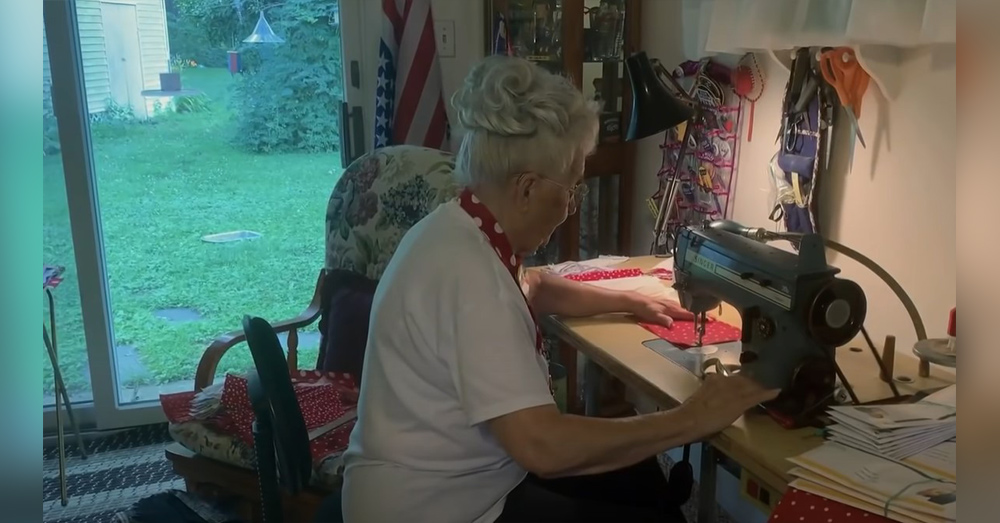 Source: Youtube/NBC News
Krier is now sewing face masks for her fellow Americans to help slow the spread of COVID-19.

So far, Krier has mad a few hundred masks on he own, but orders for new ones are coming in by the thousands. She has since hired others to help by gathering materials and getting the first stitches started. Donations of fabric and supplies are always welcome, too. 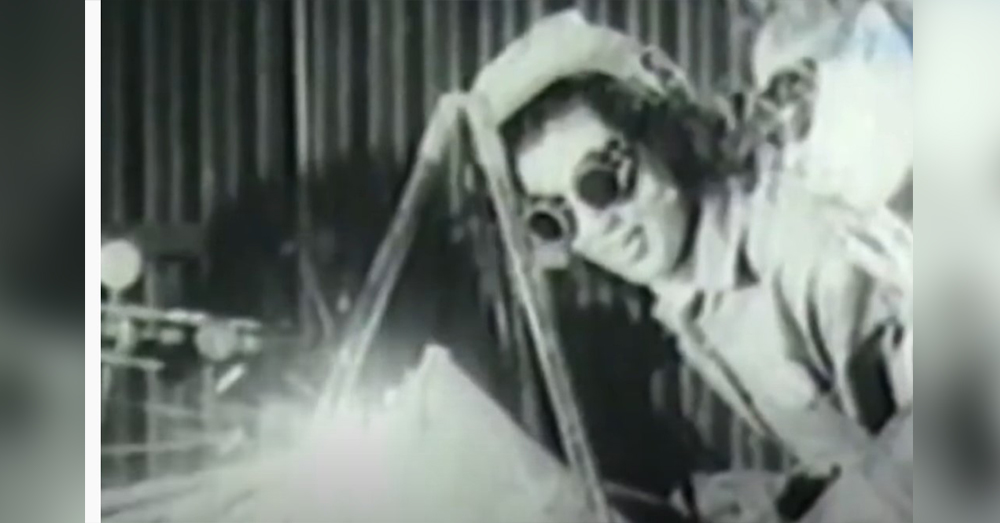 Krier remembers a time when her efforts weren’t as appreciated. She said the men returning home from the war received all the praise while she and her female coworkers were just sent home.

“After the war, the men came home to flying flags and parades, and Rosie came home with a pink slip. It really wasn’t fair,”she said.

Krier is now working to restore Rosie’s rightful honor. Many of the women this character represents are in their 90s, or have passed away. Krier is pressing lawmakers in her home state Pennsylvania to bestow a Congressional Gold Medal, America’s highest civilian honor, to the Rosies, past and present.

“This gold medal is important because right now we’re still living history,” she said. “In a little while, we’ll just be a page in the history books.” 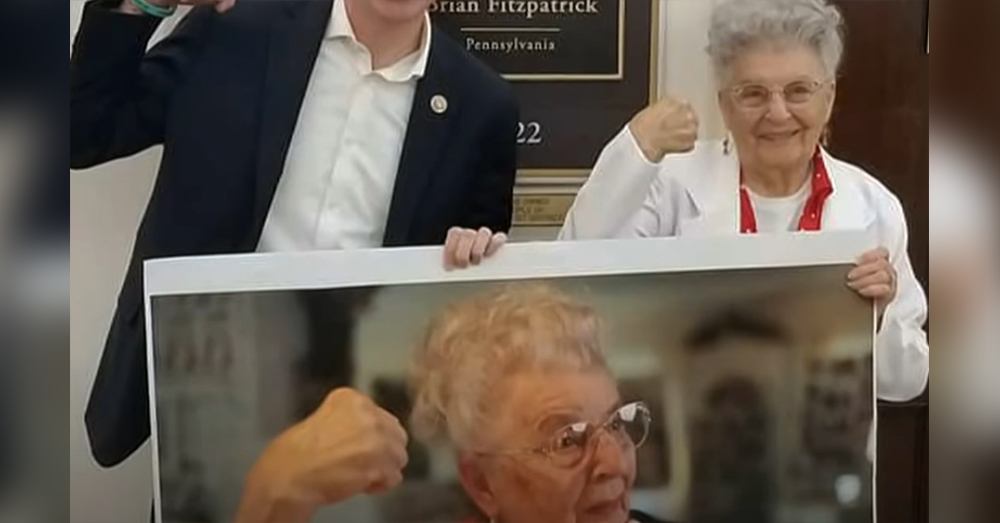 Source: YouTube/NBC News
Krier is hoping her work will raise awareness of the Rosies, and land them a Congressional Medal of Honor.

Krier is hoping the attention her masks are getting will also spread the word of the proposed legislation. She wants her fellow Americans to rally their Senators around S.892, the Rosie the Riveter Congressional Gold Medal Act, which has already garnered support from the House of Representatives.

The United States is once more facing a deadly threat, and it will take a united effort to pull us through safely. Krier is counting on Americans young and old to wear their masks and stop the spread of COVID-19. Fabric masks are a minor inconvenience, she says, compared to the heavy welding equipment she wore building bombers for the military in the 1940s. 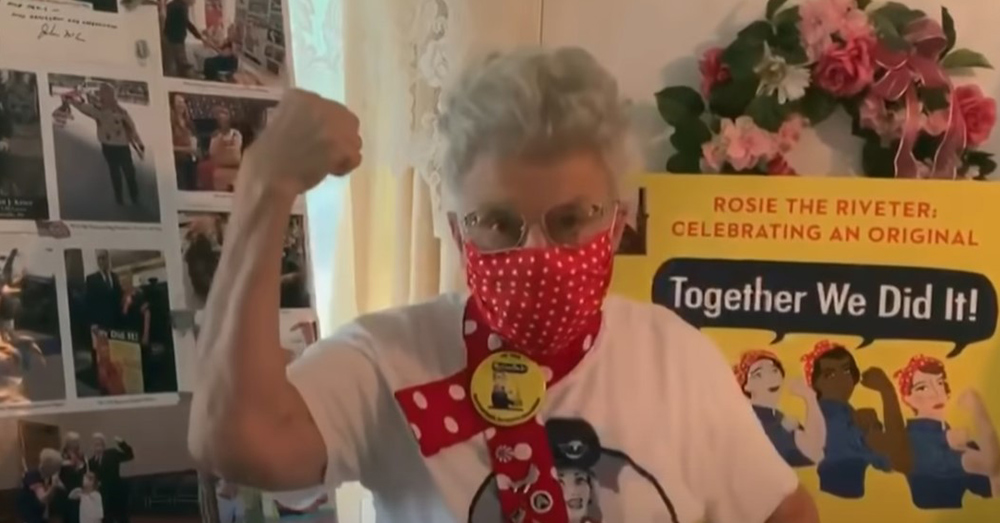 Source: YouTube/NBC News
This Rosie is still serving her country!

Though bombers are no longer as critical to our health and safety as they were during WWII, Krier says she’s happy to pass the mantle of Rosie on to other roles, like frontline healthcare workers, who are putting their own safety at risk to save lives.

“I call them our new, modern Rosie the Riveters, because they’re doing what we did,” she sad. “They work day and night to save people.”