“The only easy day was yesterday.” That is the famed motto of the US Navy SEALs. Everyone knows them to be the tough, no-nonsense elite branch of the military. It’s not easy becoming a SEAL – only the best of the best make the cut during the appropriately named Hell Week. However, it would appear that this special forces group had someone looking to join their ranks. Someone who happened to already be a seal.

In a very adorable twist, a little baby seal decided that he wanted to be an official Navy SEAL. In the cute video the little baby seal was filmed marching alongside the soldiers that were going into the ocean. Given that they were entering his home turf, it makes sense that the little seal wanted to get in on the action.

The video was just too cute to pass up posting. The War Office Productions posted it to their Instagram page where they captioned the footage as, “Show ’em how it’s done.”

The entire video shows the US Navy SEALs engaging in a training exercise – and it must’ve been a brutal one because they’re covered in loads of sand. They’re then making their way towards the surf. That is when they are joined by the curious little baby seal who wants to know what is going on – he’s so curious as to who these people are. 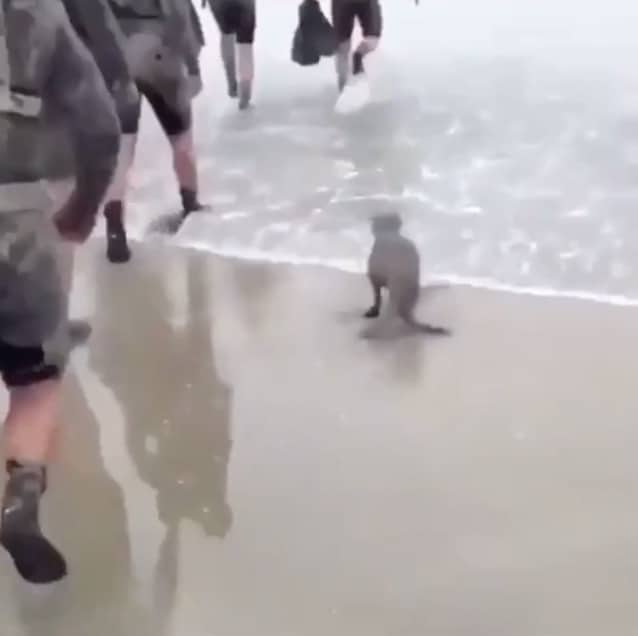 As Countryfile explained, the seals are naturally curious animals. They are highly intelligent and can easily learn different tricks when they’re held in captivity. This makes them naturally speculative about different things in their environment – much like this baby seal who just wanted to have a little bit of fun with what he assumed to be new friends.

Further expanding on the natural curiosity of a seal, Sea World weighed in, saying, “They are very curious too which is why they will follow boats to see what is going on aboard them. This is a great way for those people on these ships to get to see the seals up close in their natural environment.”

Watch the adorable video below:

This Former POW in Vietnam Can Teach Us All How to Live and Live Well: Click “Next” below!