The B-26 Marauder bomber had a pilot and a 3 man crew, including a bombardier/navigator and 3 gunners; one in the nose, one on top and one in the tail. This article and video is about one particular B-26 Marauder that would fly over 2,000 missions throughout the war, including many missions over the Ploesti Oil Fields and other German targets, as well as Normandy and at the Battle of the Bulge. 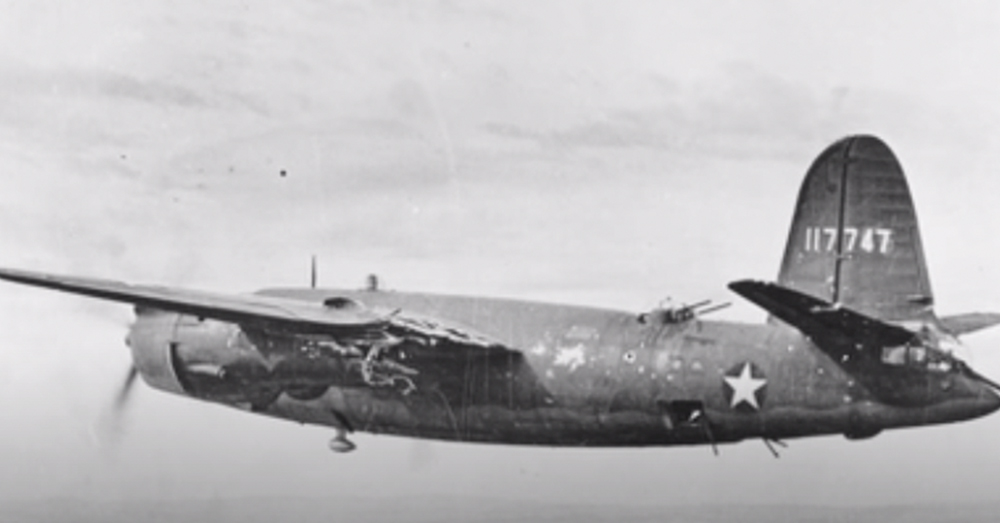 Source: YouTube/Dark Docs
The B-26 Marauder Bomber was a massive aircraft.

The plane could carry a 4,000-lb. load of bombs and was not the most agile or elegant of the bombers over the European Theater. Before dropping their bombs they would have to fly a straight line over the target and they could easily be targeted then by the German anti-aircraft guns. But this particular B-26 Marauder bomber would take on a life and a mythic quality all its own.

It flew so many missions and took so many hits that it took on a very particular and telling name: “Flak Bait.” 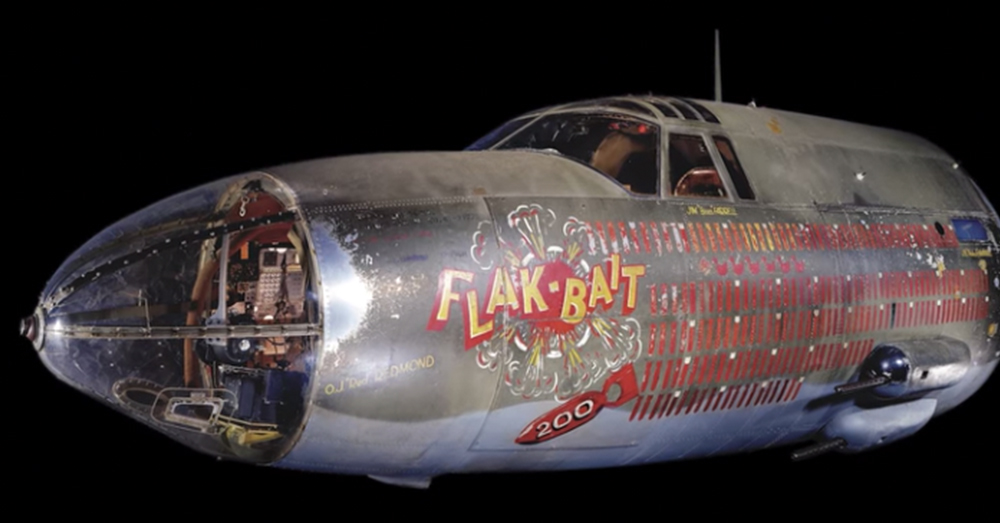 On five of its missions over bombing targets “Flak Bait” was used as a decoy to draw the German anti-aircraft fire away from other bombers. On one occasion it came back with over 1,000 holes in its skin. On two occasions it completed its mission on only one engine. On another, it made it back with one dead engine and the other on fire. 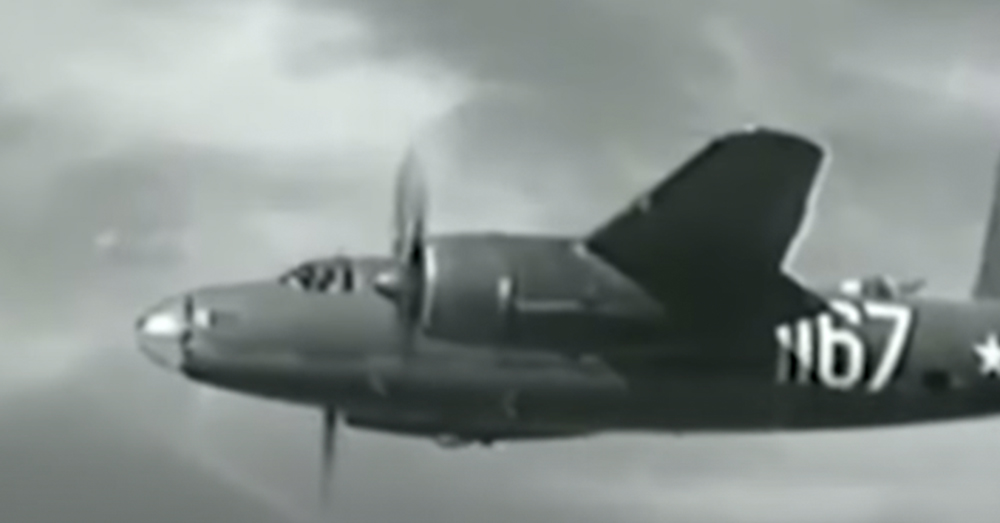 Source: YouTube/Dark Docs
On many occasions, the Germans tried to shoot the bomber down, but to no avail.

But this was not their only problem. 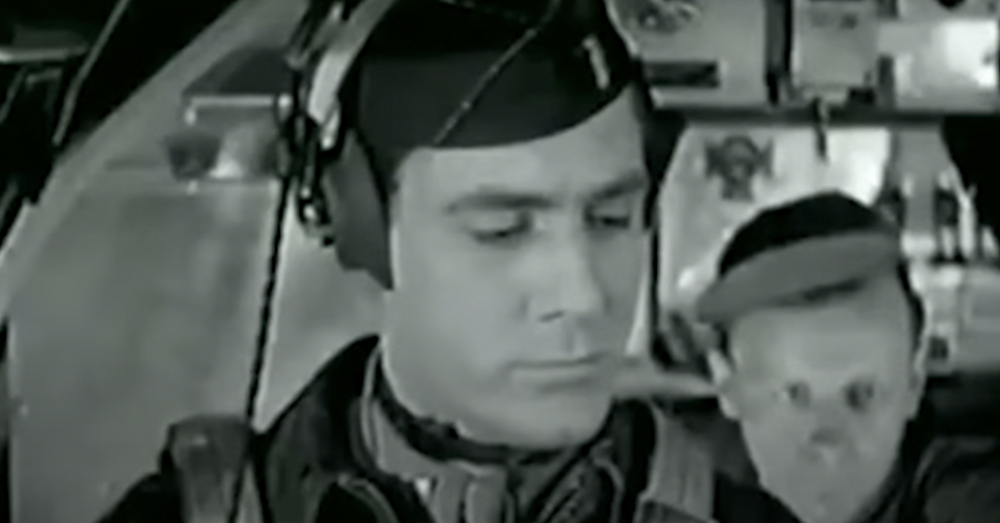 They would also have to fight off the German fighter planes that came up after them. On one occasion a German fighter opened up on “Flak Bait” with a frontal attack. One of the cannon bullets entered the nose of “Flak Bait” and shot through the instrument panel and wounded the Farell and his bombardier. Though they were wounded, they were still able to bring “Flak Bait” back again from yet another mission.

During the Normandy invasion, “Flak Bait” flew three missions with three different crews in 24 hours taking out bridges and attacking several other German positions. She flew in support of the entrapped soldiers at the Battle of the Bulge as well. 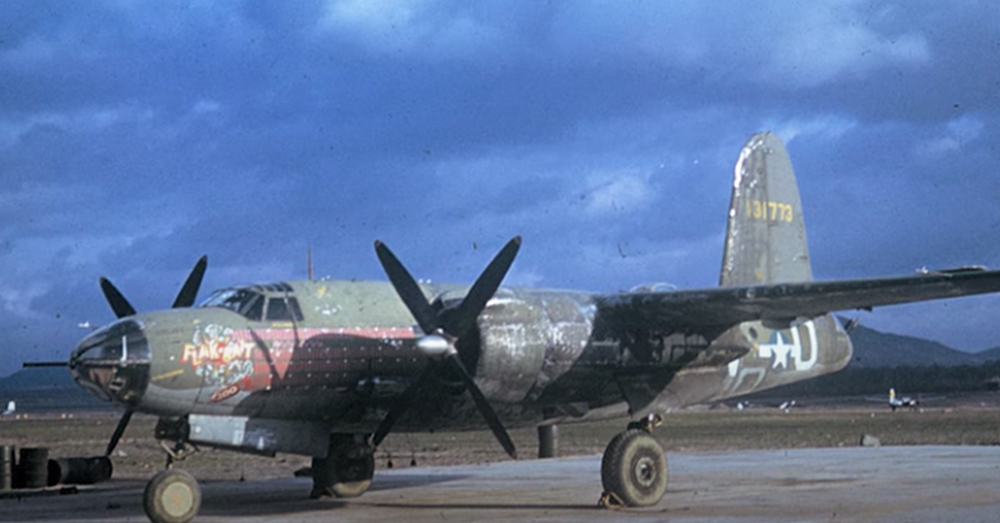 Source: YouTube/Dark Docs
“Flak Bait” made all the other bombers look like rookies.

In April 1945, “Flak Bait” flew and completed her 2,000th mission and by the end of the war would fly yet another 207 missions. “Flak Bait” gave a new meaning to the old Timex commercial ad slogan, “Takes a lickin’ and keeps on tickin’.”

“Flak Bait” made all the other bombers look like rookies and “newbies” with her long, indefatigable career. You can imagine the awe and respect that those flight crews and bomber wings had for this pugnacious airplane.

The Veterans Site is honored to remember this noble, old, sky-warrior of WWII, “Flak Bait.” She was flown by incredible crews, but her own seeming invincibility belonged to her alone. She could not be shot down. She was a beautiful beast.